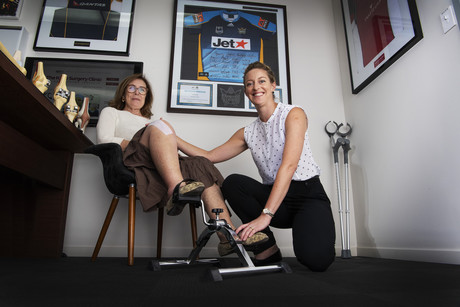 Recovering from knee replacement surgery can be a long and arduous process for anyone, but a study conducted by Bond University shows that the recovery process can become much easier with a simple and affordable piece of exercise equipment.

A $29 stationary exercise pedal that you can place within your home has been shown to have magnificent success in helping knee replacement patients with their recovery, much more so than most other traditional rehabilitation methods. Those who have used the exercise pedal have stated that they experienced reduced pain levels and improved leg function in as little as two weeks.

This new method of rehabilitation could save Australian patients at least $25 million per year by avoiding the more expensive standard rehabilitation programmes while still receiving the amount of recovery they need and so much more. Senior orthopaedic physiotherapist Larissa Sattler, a lead researcher on the Bond University study, stated that "We were surprised that it was superior to standard rehabilitation methods. Those that did the pedalling not only felt better, but they could also walk faster and further."

Orthopaedic surgeon and associate professor Dr. Christopher Vertullo stated that the study that Bond University carried out on the improvement of knee replacement recovery proves that patients do not need to undergo standard rehabilitation methods. These methods can actually cost them more than they can afford. The pedalling method is much more affordable and useful for the recovery process than most standard methods of recovery.

Here is his statement on the subject:

“It offers a take-home, turnkey solution which is incredibly cost-effective. You can buy the pedals at stores like Kmart, people can do it themselves, and they actually do better than more complicated and expensive rehab, which is often more painful in the short term and unnecessary.”

Dr. Vertullo says that, “It is amazing when you consider the amount of money spent on rehabilitation that there is actually no research or evidence around what is best until now.”

The study involved 60 total knee replacement patients at Pindara Private Hospital on the Gold Coast, Queensland. The research is being published in the Journal of Bone and Joint Surgery (JBJS).